Why You Can't Bet On Illinois College Teams Online

Editor’s note: As of Dec. 17, 2021, betting on in-state college teams became legal in Illinois. But only in person.

You may wonder why can’t bet on Illinois or Northwestern on your mobile sports betting apps.

Even though sports betting has been legal in Illinois since June 2019, you can’t bet on your local college football or basketball teams online.

Why? The answer is simple: state law. However, it is now legal to bet on Illinois college teams in person at a retail sportsbook, but the mobile ban remains.

The statute that changed the legal status of sports wagering in the Prairie State also included a “carve-out” for college sports.

It’s not a comprehensive prohibition, however. Most college sporting events are fair game for Illinois mobile bettors, though the excluded contests have one thing in common.

The law bans betting on games that involve teams tied to in-state colleges and universities. Illinois isn’t the only state where such a ban exists. Other legal sports betting states where similar regulation is more restrictive, and other states where the rule is far more lenient. 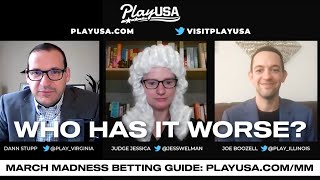 While it’s hard to determine how much revenue that Illinois will miss out on because of the local college ban, it seems inevitable. The ultimate question is whether the benefits outweigh that expense.

A line in Section 25.25.d of the Illinois code governs this facet of legal gambling in the Land of Lincoln.

“A licensee under this Act may not accept a wager for a sports event involving an Illinois collegiate team.”

However, HB 3136 amended the law, and in-person betting on these teams is now allowed.

While the University of Illinois and Northwestern University may be the premier in-state betting interests because they’re members of the Big Ten Conference, this covers all Illinois college and university teams, including:

There are smaller Illinois schools with athletic departments that compete in the NAIA (National Association of Intercollegiate Athletics) and the lower levels of the NCAA (National College Athletic Association). However, legal sportsbooks only take action on Division 1 events.

This ban doesn’t apply to sporting events inside the state, as long as they do not involve an in-state team. Big Ten basketball tournaments in Chicago is a good example.

Licensed IL mobile sportsbooks could take college basketball bets on a game between Indiana University and the University of Iowa within that tournament, for example. However, all games that the Fighting Illini and Wildcats were playing in would be off-limits.

That still makes the sports wagering law in Illinois more restrictive than its neighbors’ but less than other jurisdictions. The laws in neighboring Indiana and Iowa represent this contrast.

College betting bans in other states

In Iowa, there aren’t any restrictions on specific teams that legal sportsbooks can take action on; the only limit is regarding prop bets.

Iowa sportsbooks can’t allow prop betting on individual athletes. For example, how many points an Iowa Hawkeyes basketball player will score in a game. This applies regardless of which institution the athlete represents.

For betting purposes, Indiana treats college sports the same as all others. Because sportsbooks there can post markets on an array of college sports events, it doesn’t mean they will.

It’s quite a spectrum of approaches across states with legal wagering. Oregon, for example, barred all wagering on college sports. Indiana, Pennsylvania and West Virginia represent the other end of that continuum, with no special carve-outs for college sports.

New Jersey, New York, Virginia and Washington, DC, have taken a similar approach as Illinois. These states have also banned wagering on college teams within their borders. The prohibitions in DC and NJ also include all events that happen with those jurisdictions, as well, regardless of which teams are playing in them.

Given the tremendous interest in college sports, why would states essentially sacrifice the potential revenue? Simply put, it’s effective lobbying.

Why do states limit wagering on college sports?

Proponents of such limits include legislators and officials in the college sports industry. Their rallying cry has two arguments:

The argument is that because athletes in these events are poorly compensated for their labor in comparison to major league athletes, they are more vulnerable to match-fixing schemes. Also, the idea of limiting wagering on these events would mean that college athletes are less likely to be bullied in person or on social media by belligerent bettors who lost money.

However, there isn’t any evidence that suggests legal sports betting on college sports leads to integrity threats or an increase in negative interactions between athletes and bettors. As a matter of fact, these restrictions could backfire.

While legal books abide by the law in IL, illegal bookies and offshore websites will be more than happy to take those wagers on in-state college teams. That keeps the action on in-state teams on the unregulated, “black market.”

People who use illegal means to place bets are more likely to be less opposed to trying to influence the outcomes of those events. The last time law enforcement uncovered an attempt to fix a college sporting event, it was part of an illegal gambling ring.

The phrase, “Sunshine is the best disinfectant,” is appropriate in this situation. There’s no good reason to deny college athletes the same regulatory protections that their counterparts in other leagues enjoy. Regulation improves integrity.

If leaders in college sports are so concerned about athletes being vulnerable to match-fixing because of their low compensation, they can easily address that situation. They can give those athletes more of the revenue their labor produces and pays the salaries of those officials in college sports.

Illinois’ lost revenue due to this ban

It’s hard to pin the exact figure regarding revenue loss. It’s difficult to accurately assess how many people would wager on in-state teams in IL and how much they would bet if given the option. The illegal market isn’t the only place where this action may head instead, however.

Illinois residents can cross the Indiana or Iowa borders to place legal bets on IL college teams there. In that way, Illinois residents will essentially transfer their gambling tax dollars to these other states. Because Illinois has two Big Ten institutions within its borders, the regulated market in IL could lose out on millions of dollars in handle annually. That equates to millions of dollars in tax revenue over the years as well.

Imagine if Illinois or Northwestern play in a Big Ten men’s basketball tournament championship game or qualify for the Final Four. The dollars lost on just one such game alone could be massive. Perhaps most harmful, however, is the damage to a market that is still developing. As bettors who have traveled out of state or used illegal channels to place bets can’t find the markets they want with the legal books, they’ll stick to their existing habits for not only these wagers but all their betting activity.

Illinois law isn’t the worst but it could be better

In summation, bettors in Illinois should be happy; it’s not a complete ban on college sports wagering. This compromise is one of several that has legal sportsbooks up and running in the Prairie State.

At the same time, the logic behind this provision is questionable. It could lead to bettors staying on the unregulated market and/or traveling out of state to spend their money elsewhere. At worst, it could leave athletes vulnerable to match-fixing attempts. To some degree, this was a classic “solution searching for a problem.”

The state may repeal this part of the law someday.