The 5-3 Bears travel to Tennessee to take on the 5-2 Titans on Sunday, where they will be underdogs for the eighth time this season.

Both teams are coming off of tough losses. Chicago fell in overtime to the Saints in NFL Week 8, while Tennessee took a surprising loss to the Bengals.

The temperature might be about 40 degrees warmer in Nashville than in Chicago on Sunday, but can the lowly Chicago Bears offense take advantage?

We’re not holding our breath. With that said, the Titans’ defense has been one of the most disappointing units in the NFL in 2020.

Here are the best Illinois odds for the NFL Week 9 clash of potential playoff teams. 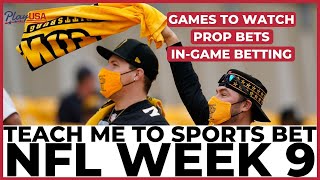 The Bears’ offense made progress on Sunday, but it still left much to be desired.

Chicago gained 329 yards against the Saints and scored 23 points. While that’s below average by 2020 NFL standards, there were signs of life. The same could not be said about the Bears’ previous outing against the Rams.

The refs flagged the Bears seven times for 53 yards, though, and a productive day from Chicago’s top three receivers was mostly overshadowed by its fourth.

Ranking the things that got the most hurt here:

The Bears ran the ball better on Sunday, as David Montgomery rushed for 89 yards. They were missing three starting offensive linemen by the end of the game, but there’s a case to be made that the backups played better than the staters have for most of the year.

To that point, the Bears’ offensive line is in extreme turmoil right now with at least four starters out due to a combination of injuries of COVID-19. It will be legitimately fascinating to see who Chicago trots out there on Sunday, provided there’s a game at all.

At any rate, the Chicago offense is bad, but so is the Tennessee defense. The Titans rank 27th against the pass and 22nd against the run. Joe Burrow and the Bengals hung 31 points on them on Sunday.

As uninspiring as it was, Chicago can’t be too upset with scoring 23 points against a decent Saints defense. If it does the same against the Titans in Week 9, will that be enough to win?

It’s tempting to say yes, but the evidence suggests otherwise.

Tennessee is scoring 29.7 points per game, which ranks sixth in the NFL. It racked up 441 yards of offense against Cincinnati, and all things considered, it was a bad day for the Titans.

Derrick Henry leads a ferocious rushing attack, which ranks fourth in the league. The Bears, meanwhile, have struggled against opposing running backs in 2020.

Alvin Kamara may have only run for 67 yards on Sunday, but he caught nine passes for 96 yards.

People talk about the Chicago defense as if it’s elite, and it is often put into tough situations by the floundering offense. But the numbers tell a different story: The Bears are 16th against the run and 14th against the pass.

Chicago is also just 19th in sacks and 22nd in takeaways. Based on how its salary cap resources are allocated, that’s just not good enough.

To the Bears’ credit, they are an elite red-zone defense. Their opponents score touchdowns on just 40% of red-zone drives, the lowest mark in the NFL.

To summarize, the Bears are basically mediocre on defense until opponents reach the red zone. Then, they are outstanding, so let’s call them “above average.”

The problem: the recipe for a Bears contender is a lights-out defense and an average offense. Right now, the defense is above average, and the offense is dreadful.

Throw in home- field advantage, and you can see why the Titans are favored to the extent that they are.